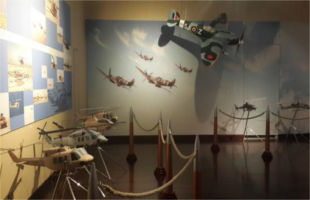 Get Back in History of Bahrain Military since 1783.

Tips: It is located next to Sheikh Salman Bin Ahmed Al Fateh Fort(Riffa Fort) in East Riffa. So, if you are visiting Bahrain Military Museum then you MUST also visit the Fort which was built in 1812.

Its a new museum opened at the beginning of 2013. The information board shows Ticket price of 1 BD for residents of Bahrain and 1.5 BD for non-residents of Bahrain and FREE for children. Tickets prices are really cheap. However, When i visited the museum in April-2015, they were not charging any fee to any of the visitors, may be, because its a new museum so they are keeping it for FREE in order to promote it.

TIMING: Sunday to Thursday : 8am to 1pm

The Military Museum acts as a monument to Bahrain’s military culture, from ancient military history to the modern-day Bahrain Defense Force. Its was built in a similar design resembling the Sheikh Salman Bin Ahmed Al Fateh Fort in East Riffa. The fort was a Military headquarter for few decades when built in 1812.

There were four Halls on the ground floor.
1. MAIN HALL, it contains paintings of major battles that took place in Bahrain during 18th and 19th century.
2.RULERS HALL, this hall was dedicated to the history of the Rulers or Kings of Bahrain since 1783.
3.CASTLE HALL, There were around 18 big and small forts in Bahrain but now many are in ruins except four forts which have been restored.
4.HORSES HALL. Bahraini horses historically played an important role in terrestrial confrontations or battles, when there was no modern technology, such as tanks or cars etc.

The museum also had Parking plot and it also hosts CINE CAFE, a popular cafe in Bahrain, which serves coffee, sandwiches, juices, milkshakes, pizza, salads and much more.